First part of our 1080km long bike trip from home to Austrian Alps.

Crunching gravel under the wheels, trees all around and we are reaching one of many tops of today. The view to the snowy caps of the peaks reminds us our home and the nostalgia becomes bigger every day despite of being in a paradise. We know that we’ve had enough but we can’t stop imaging our next trips – touring with a child on our dream tandem bike which we’ve been inventing the last 4000km.

Janko is 13 months old, starts to walk and is a perfect buddy. Until now we’ve gone to a couple of small walk trips and some overnights in tent. During our bike trip in Americas we knew for sure we wouldn’t enter the system and not live with loans – but the nesting instinct during pregnancy and the fact we’ve spent almost all savings caused we bought an apartment in Banska Bystrica on mortgage. Surprisingly it’s not bothering us and after a complete reconstruction we have our home with all souvenirs from travels. After four years of being married we finally change our residency and officially live together.

We host touring cyclists, friends and are happy to every visit. Jan finally decided to end his PhD studies (without the title) and I interrupted mine because of pregnancy. We work (I’m on the maternity leave), we live a normal life and actually enjoy it. Jimbo – a cyclist from Japan who we met at the main square at the end of February and invited him to our home for Weekend – reminds us our dream of tandem touring bike. We start to read books about bicycle building. We search web to get inspiration from existing tandem bikes and improve the designs. Youtube teaches Jan how to weld but at the end we find a guy who makes bicycles. It’s for sure a better solution than to learn welding on a bicycle which should be responsible for our lives. The project is late and new complications appear but finally on 2nd of August our dream tandem bike parks in our cellar … unpainted, without functional folding and with less breaks than planned – but it’s there and works.

In the night we paint at least “JEJ – www.cos.sk” on the frame and make an information plate with caution about our length. Test ride, piling of needed stuff and listening to our favourite bicycle songs… 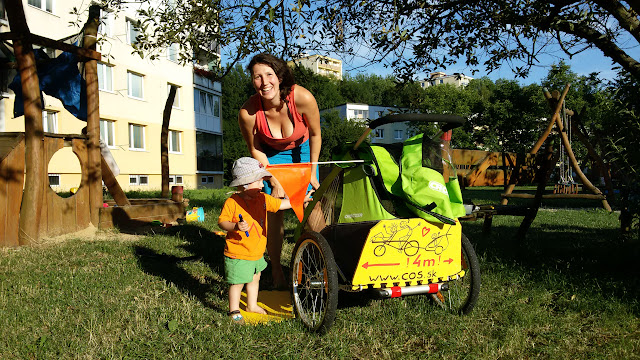 On the road again

The most difficult part of travelling is to get going. Our new member is entertained by throwing the stuff out of the bags, mussing prepared piles and demanding attention. We wanted to leave early morning but in reality we start biking on 1:30pm. People stop by already in the front of our house, take pictures of us and wish us Farewell. The first stop is after 2km in front of a bike shop to attached bottle carriers. The actual trip begins and while crossing the main square we hope to not get a flat tire or any other embarassment.

Second stop is just after the square (1km from the bike shop) – Janko doesn’t want to be in the trailer and yells on whole street… it starts to be interesting :) We succeed to calm him down and soon we are on a bike path next to river Hron. We are sitting on a self-designed bicycle and moving, feeling the wind in our hair, the child is sleeping in the trailer and we are wearing big smiles … On the road again … nananananana … on the road again…

“Where are we having a lunch?” The hunger brings us back to reality which destroys the euphoria and we stop at the first place with food. From the “Fried everything” menu we get soup and cheese with fries. Janko wakes up and wants to eat. We have to admit that our healthy food restrictions will break during this trip.

We continue on a dike to Zvolen admiring the newly paved bike path. We are happy, greet and wave all passing people … and need to stop again, because the child feels uncomfortably – it will be a miracle if we will get to our destination today. Many people stop by to talk with us during more than an hour spent on a playground at the square – we are an attraction.

Pedaling again direction Viglaš. The road is busy and full of trucks and despite the big shoulder we feel uncomfortable. We survive the stress and noise and turn to Slatinske Lazy. The road is peaceful but uphill, later really steep and then push-the-bike steep. In a local shop we are invited to a coffee and cake with locals (until now the Slovaks get the A+ grades for behaviour to touring cyclists).

Then directly to our friends to Zaježová. This “directly” sounds too easy and fast – after 2 hours of  partly cycling, partly pushing the bike with screaming child we finally arrive to our destination. Totally exhausted and with help of locals we find the right house. We get perfect treat from our hosts Katka and Chavo. There is also another guy Amigo who has triplets and in total 5 kids at home (the fact we’ve met a real person who has triplets is so special we must mention it here).

The first day: 56km, some pushing, muscle pain, the knowledge that Janko is OK mostly when he sleeps (otherwise he wants to play and be outside of the trailer) and the warm feeling in our souls – on the road again. 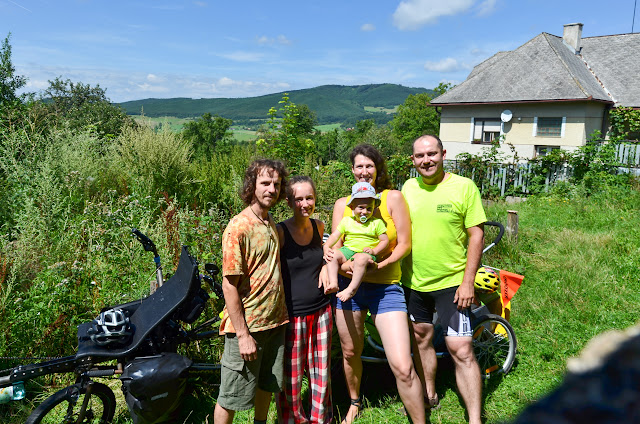 The plan for the next days is clear – look for small roads towards the Danube river. We are amazed by the surroundings – bad side road means low traffic, small villages, nice hills and valleys with narrow “bike” roads with many potholes in pavement. Weather is also nice and we get the typical cylists’ tan.  We sleep next to a natural lake in flooded quarry Devíčie  in a wooden cottage in exchange for watching the music equipment during the night. Later we realize it was not a good deal because we cannot sleep well and wake up many times because of any strange noise. In the evening we are part of a private concert from guys from Buchatramka band whose came to take a bath. At the end it was a nice night here and with the lake just for us in the morning this sleeping spot belongs to the top on the trip. On the way we meet Jan’s cousin in Sebechleby – we didn’t even know it is on our way. Here are many wine cellars which belong to UNESCO heritage. We visit some and also taste some local wines because the people are really welcoming here. We are surprised by the really nice architecture and atmosphere so we definitely advice to visit this place! 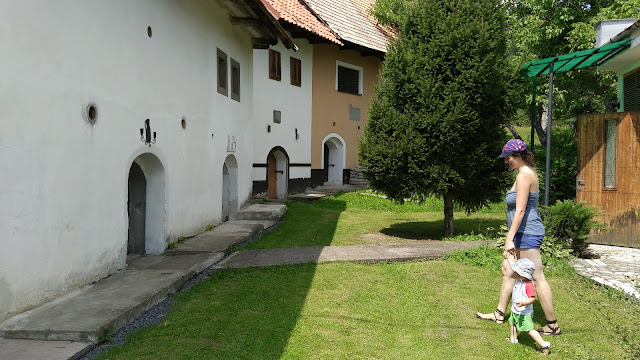 Two more days and 100km further we reach Štúrovo. Jan’s butt starts to be used to the saddle and my legs adapting to this different movement  – I’m mostly on the front seat in the half-lying position and when pedaling I discover muscles I didn’t know I have. I feel pins and needles in my feet – pedaling in sandals with 5mm sole isn’t the best idea. We’ve even mounted wooden plates on the pedals but that’s still not enough.

Janko acclimatised to the traveling mode and he is OK with it if we stop at least twice a day on a playground and for some part of the day he sits with me in the front (in a wrap or just on hands and ideally with my breast in his mouth). I sometimes feel like the topless virgin at the ship bow while brest feeding but a satisfied child equals satisfied parents.
The time for naming our bike has also come – actually the bike itself told us (squeeked) the name. In the morning after rainy night  the color of our tandem is much more orange than before and with every dew gets the color more and more. Also the sounds it makes become more interesting – squeeking, crackling … that’s our love – our Rusty. 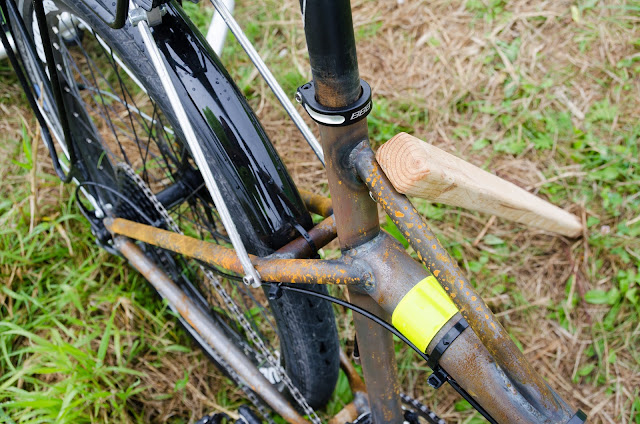 Big part of the Danube bike route doesn’t go on bike paths at the river. It goes on smaller roads with low traffic and leads the cyclists trhough small villages in south Slovakia. It’s true that the people here speak better Hungarian than Slovak but many stop by and talk to us in their “hungarian slovak” and we understand each other without problems. Our Rusty squeaks permanently which together with the rusty color also attracts the attention. Jan found out that that while braking slightly, the squeaking sound stops so with a little loss of energy but quietly we pass people on the streets and greet and wave them with big smiles.

One night we camp at a fishing spot directly at the bank of Danube. The sounds of the water and the sunset above the river are romantic but it also brings the masses of mosquitos which create black aura around our bodies. Janko is like a little Poseidon what means that every water attracts him like a magnet so our senses are still in attention. The main goal is to keep all participants dry and alive :). Bathing in the river in the morning cleans our bodies and anyway all Slovaks should try to dive into our biggest river (Danumbe batism:)). We wash also our clothes and Janko helps this “washing program mama” by taking the clean pieces out of our foldable basket and throwing them back to the mud. Then he enters the basket by himself and pretends it’s his water pool. 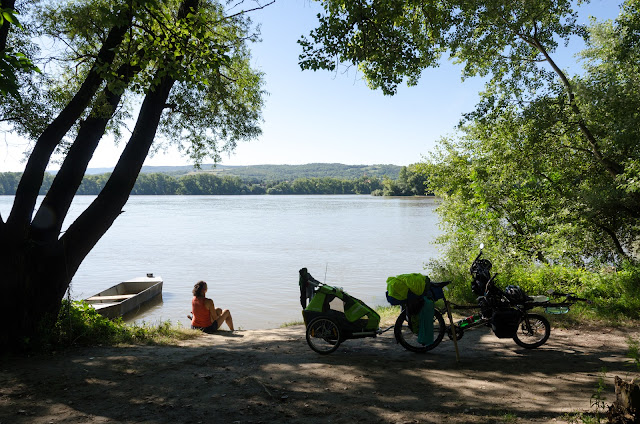 Already during the first night in the tent we realized that our upgrade to 2x65cm (width) sleeping pads is far not enough when the child sleeps in the middle and one or even both parents get out of the pads. During this Danube night we find out a better system and we put the sleeping mats to the side which creates space 130cm long (shoulders – knees) but 190cm wide. The child stays warm and we have pillows under heads and the wrap (used for carrying Janko) under the feet… the result is that everybody sleeps well.

The bike route finally joins the dike and around us is just nature, trees, flowers and sometimes we see the river. We meet many smiling cyclists going opposite direction almost without pedaling … it’s really windy and unfortunately it’s a head wind for us.

In Komárno Janko socializes with local underclass and when leaving the square his new friends find time between a cigarette and bottle to give him a motorbike toy. On a playground we meet our support team – my parents bring pizza for the lunch, normal sandals for me and more nice-to-have little things. We also give them 5kg slackline because we realized we really won’t use it.

The sixth day after the start and 340km later we lean the bike at the crowded dike next to Bratislava and we spend the pause bathing in the lake at Rusovce. We meet some friends and followed by surprised looks of passing people we enter the city. A couple short visits and a relaxed evening at my aunt can start. We laugh that we can use next 2-week holiday for such BB-BA bike trip with a 2-days time in Bratislava. Jan tunes the Rusty’s breaks in the morning and it’s suddenly quiet – we’ll see for how long. Our friends Katka and Achmed accompany us to the border and while eating pears from their garden we enter the Donauradweg. 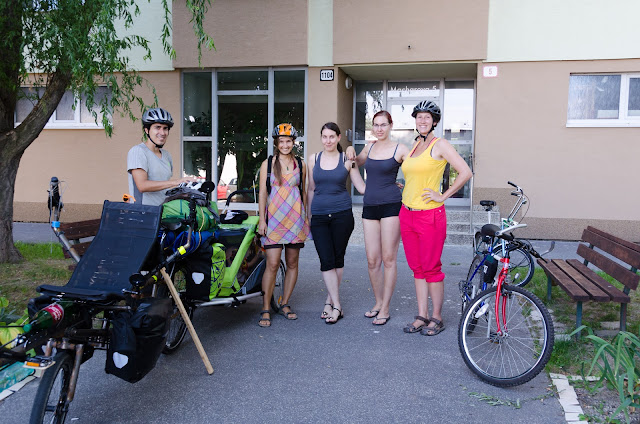 More pictures from the trip are in the google photos album.