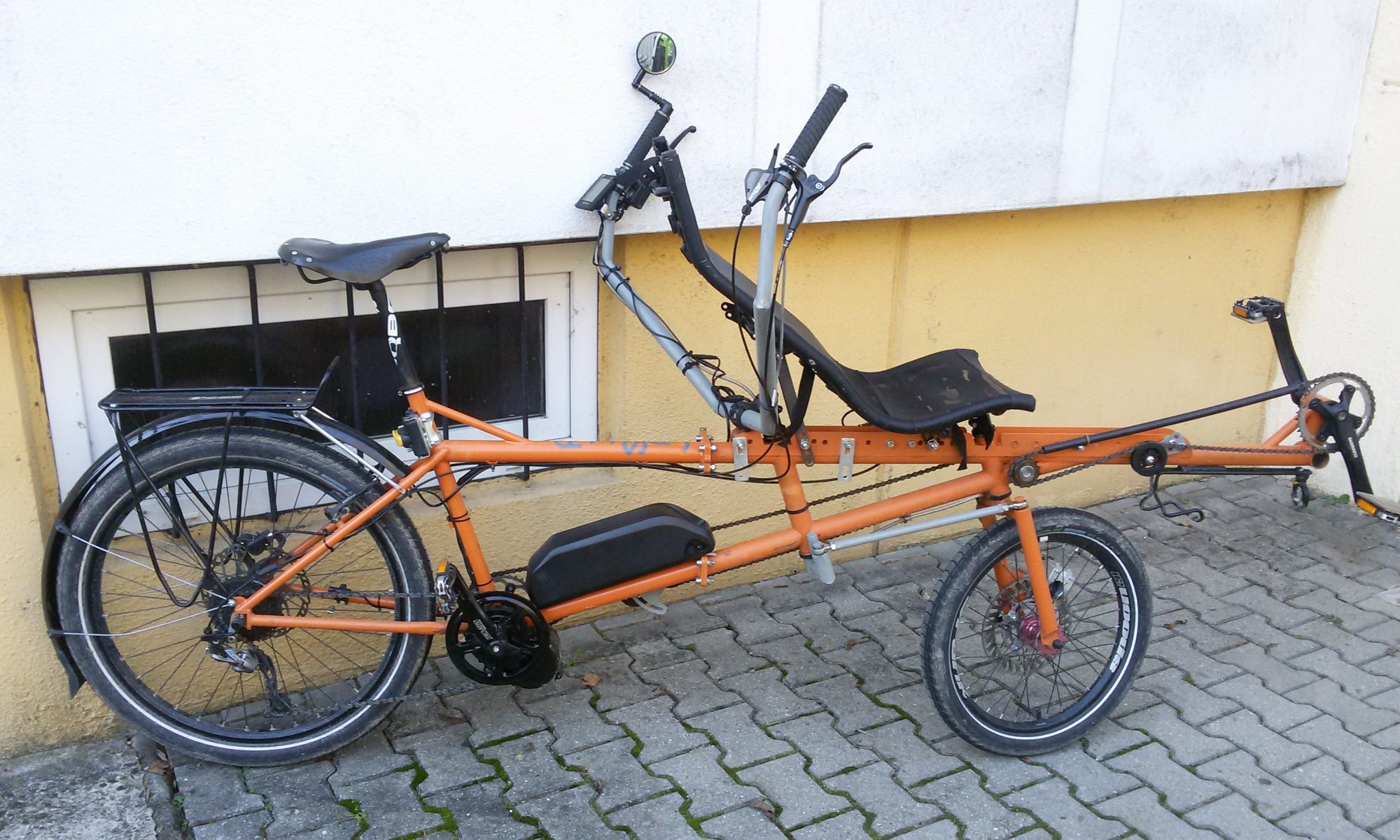 Why did we add an electric motor on Rusty and what were our first experiences cycling e-tandem with two kids… The article discusses also available options on market, reasons to choose the mid drive motor, programming of the BBS02 and practical tips which can be useful also for others :)

After the return from our honeymoon in 2014 we tried an e-bike for the first time.  I still remember the big smile which appeared on my face after I started pedaling and when I felt the acceleration :)

E-bikes are becoming more popular because of their advantages: it can get you higher and further with much less effort … you can discover new routes and trails easier because even if they don’t lead anywhere, you don’t care so much (than if you have to pedal it only by yourself :)). The disadvantage is still the higher price and need to charge it every day while touring.

I started to think about adding a motor to our tandem this autumn – we cycled a nice bicycle path from Korytnica to Ruzomberok which follows a former railway. The inclination is small but it was raining on the way back and the children wanted to sleep but we didn’t have the trailer. In these nasty conditions we were doing only like 10km/h. I realized – why we should suffer like this? Sure, we’ve already experienced a lot on our Rusty and even went up the Hochalpenstrasse so we know what is possible, but why suffer and go slow when a motor can help us? And even more now when we carry a kids bike and the third child is on the way.

Good e-bike starts around 2000€ and its motor reacts to the pedaling power, but this kind of motor (like Bosch, Yamaha, Shimano) cannot be bought separately and it needs a special frame. There are also many conversion kits to add electric power to any normal bicycle and the prices are quite acceptable (the main producer is China, because there is a big demand – more than 200million ebikes are already there). Two main options are:

Wheel hub motor drives the front or rear wheel directly. The bicycle remains the same just one wheel is changed and battery, controller, PAS (pedal assist sensor), brake sensors and display is added. Big advantage is that it keeps all the gears. Disadvantages are: more difficult flat repairs and attaching the controller on the bike (many just fit it inside a saddle bag). There are two types of hub motor: direct drive (gearless) and geared.

Direct drive hub motors are much bigger (because of the torque), heavier, and have more drag while pedaling. On the other side they are more effective in higher speeds, durable and they can be used for regenerative braking and save some of the energy back to battery. Geared hub motors are smaller, lighter. Because of the gears the motor rotates faster and more effective and the torque is higher even in low speeds. But it cannot be used for regenerative braking because of the freewheel. It’s also said that they are more noisy but that depends also from the controller (I saw also a video of gearless motor with loud “futuristic” sound)

Mid drive motor – drives the chain and the wheel remain the same. This is mainstream in better electric bikes. Because of the position at the bottom bracket, the center of gravity stays low and handling is better. It is more effective because it works always in optimal RPMs (adjusted to the speed of human pedaling) and it can have higher torque. Cooling of the motor is better and therefore it is more suitable for long and slow climbs. Disadvantage is the higher weight but as it includes the controller you don’t need to attach any additional box on the bike. Another disadvantage is that you loose some gears because in the front stays only one chainring.

At the beginning I thought that the installation will take like one hour but it was much longer at the end (one evening, morning and partly afternoon and later learning and re-programming of the engine). The motor was touching the frame and I had to get some spacers (2 big seger rings did the job). Luckily the battery could be mounted in the original holes for water cage. Mounting the C965 display was troublesome and I had to manufacture different holder to fit it on our handlebars. Cabling and attaching the shift sensor was easy (shift sensor is a good thing – it reduces the power of the motor during shifting to protect the chain). I had to adjust the brake sensor for our motorcycle brake (fortunately it originally had a brake switch). I didn’t mount the throttle – we still want to have a bicycle and turn pedals to move. For the first trip with the upgraded bike we went just next to our home. The next day we did 45km in 3h on paved and unpaved hilly roads. The motor really pulls the bike uphill but it’s a strange feeling that it doesn’t respect how much we pedal. Sometimes we were just rotating pedals without any resistance and only the motor was driving the bike forward – at that time I still didn’t understand how the assistance levels really work. So how do the Bafang assistance levels work? It’s important to realize that it is a simple pedal assist – when the cranks are rotating, the motor is on and helps with power according to the selected assist level but it doesn’t matter how fast the cranks rotate or how strong the cyclist pushes the pedals. There are 10 assistance levels (0-9) and the power is defined for each level separately (the power can be reduced when some defined speed limit is reached – this weird behavior is probably used because of the throttle to set the maximum speed for specified assist level). The maximum speed limit is set on the display (and of course can be higher than 25km/h :)).

Programming of the BBS02 is actually really necessary because the original setting is really weird (probably aimed to be used just with the throttle) – the first assist levels are OK but the assist power is reduced at quite low speed and the higher assist levels are too powerful and the driver then just rotates cranks while all the power comes from the motor.  Everything what is needed is a programming USB cable (approx. 20€) + free software. It’s good to know what all the parameters mean (here is probably the best explanation). You can start from scratch or use and adapt some available profiles (many profiles are included in  Luna Cycles installation). I was inspired by the “limitless” profile – the main idea is that the motor assist power stays the same regardless of the speed (parameter LimitSpd is 100% for all asssist levels 1-9). I changed the settings a little bit: The profile can be downloaded here.

With these settings we took the bike for a 60km trip in mountains with total elevation gain 1000m. Because of the well defined levels of assistance we could always choose optimal one so we still make some effort pedaling but the motor helps (it is needed to change the assistance levels often, so I moved the switch just at my finger to reach it well). Our total weight with children and the trailer was around 290kg. We could easily pedal up a forest gravel roads and also paved roads with grades over 12% (Evit wasn’t even seeing the road because of the inclination) and we had to use the highest assist level only couple times for a short period in the steepest hills. At the end the motor started to produce strange noises (probably the empty battery couldn’t provide enough amps) and we had to pedal more and use the motor less. FYI: in the front is the original 44T chainring and our speed uphill was around 10km/h. Totally we did around 150km at the beginning of November 2018. It was nice to explore new routes in surroundings of Banska Bystrica and to not get totally exhausted in hills (Evit was at that time in the 6th month of pregnancy). Children handled it really well and we were happy to use the last sunny and warm days. Some drawbacks we know about:

In winter I wanted to change the BBS02 for a stronger BBSHD but we’ll keep the BBS02 because the BBSHD is much wider and the left tandem crank doesn’t fit there. It could be adapted but that would be quite complicated. So we decided to change the gears instead and I hope even this “weaker” motor will be enough with additional lower gears. Good links and sources of information: